One of the most interesting aspects of cooking or baking is learning about the background and history of a dish. This summer I learned more about madeleines while visiting Paris. I saw these little gems on the breakfast buffet table in our hotel and was impressed.

Aren’t they beautiful? I think they look like little boats! Their taste was wonderful too. I wondered how they achieved that peculiar little bump. I decided that I wanted to know more about making them and would keep my eyes open for a cookbook dedicated to making madeleines.
A few days later, we went to a famous bookstore in Paris called, “Shakespeare and Company.” It is a small bookstore with both new and used books, many of them in English. It is located just by the Notre Dame and we went there in the evening. What beautiful sights! 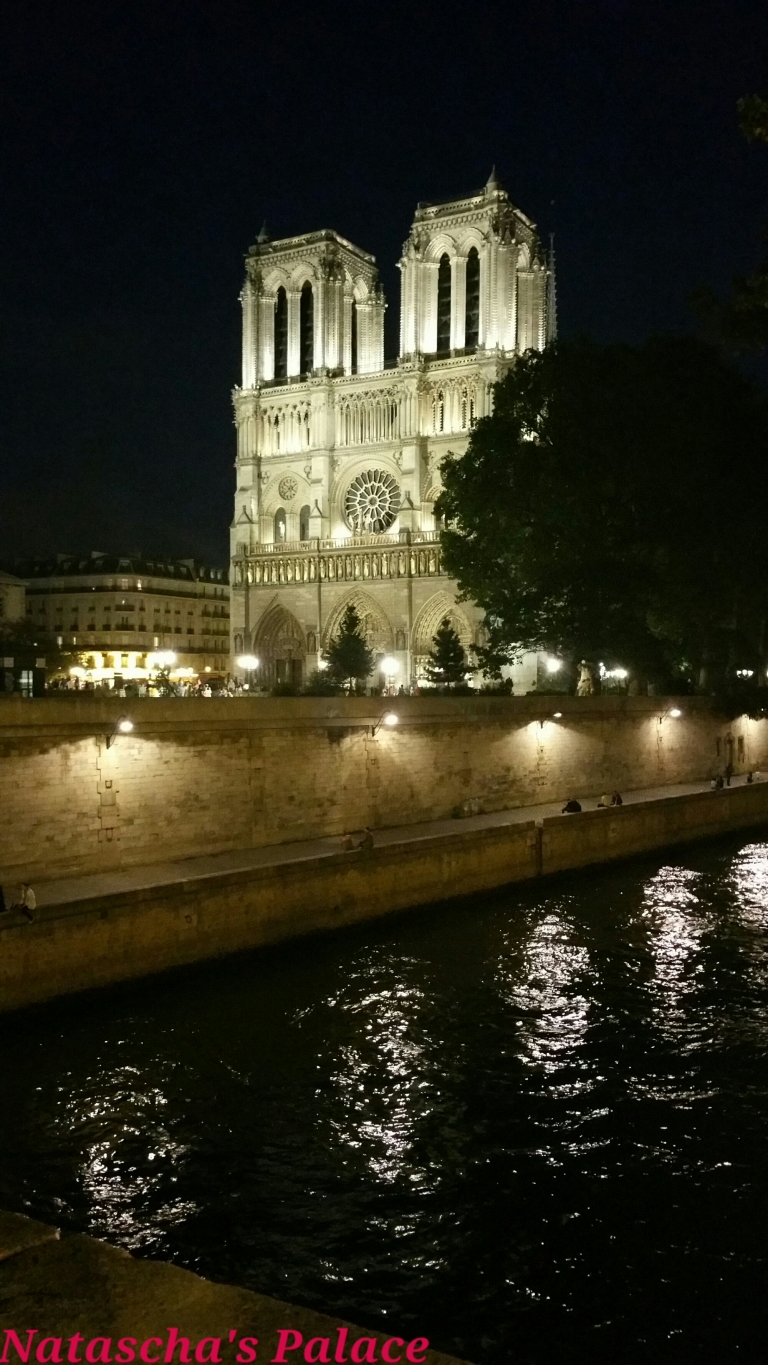 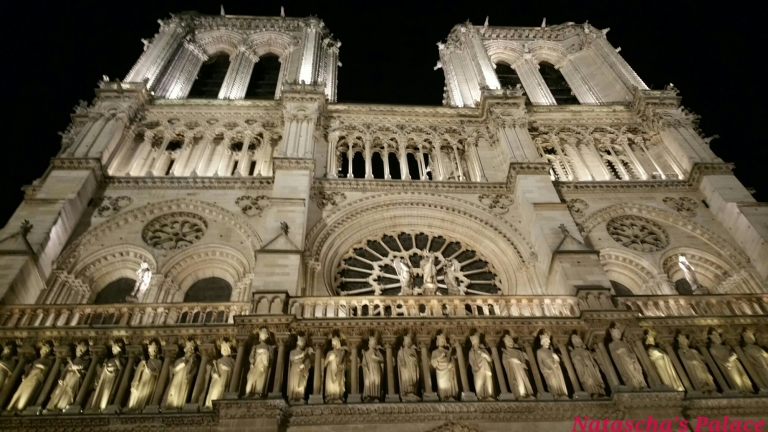 The bookstore was such a great visit for me because I had not been in a bookstore with English books in about 8 years. I still miss them sometimes. I used to love popping into bookstores and browsing for a little treasure! (Yes, that is how I feel about books. They can be great company :).) Well, this bookstore did not disappoint me because I found 2 cookbooks! One on macaroons and the other on…madeleines! Hurray! I bought them and they were even stamped with the logo of the bookstore.

I began to read the book and learned that madeleines are often associated with the French author Marcel Proust. I wondered why and found out that he used madeleines in one of his works to illustrate involuntary memory. Involuntary memory is an interesting theme, in my opinion. Here is the excerpt from his work.

“No sooner had the warm liquid mixed with the crumbs touched my palate than a shudder ran through me and I stopped, intent upon the extraordinary thing that was happening to me. An exquisite pleasure had invaded my senses, something isolated, detached, with no suggestion of its origin. And at once the vicissitudes of life had become indifferent to me, its disasters innocuous, its brevity illusory – this new sensation having had on me the effect which love has of filling me with a precious essence; or rather this essence was not in me it was me. … Whence did it come? What did it mean? How could I seize and apprehend it? … And suddenly the memory revealed itself. The taste was that of the little piece of madeleine which on Sunday mornings at Combray (because on those mornings I did not go out before mass), when I went to say good morning to her in her bedroom, my aunt Léonie used to give me, dipping it first in her own cup of tea or tisane. The sight of the little madeleine had recalled nothing to my mind before I tasted it. And all from my cup of tea.“

I think this is beautiful. What a writer. I can clearly imagine it all happening. I had never read any of his works before but it was interesting to “meet” him in this unexpected way.

Now I was really keen to make madeleines. I had made some once before but this time, my interest was different. There was an experience attached to the recipe.

I read some recipes and discovered that the author had not only included her recipes but also accumulated the contributions of madeleine recipes from around the world. Feeling realIy enthusiastic, I decided to make some when I got home. Here is a recipe from this cookbook which, I have to say, is straightforward and YUMMY!

1. Sift the flour, baking powder and salt in a small bowl. Set aside.
2. In a large bowl, beat the eggs and sugar on low speed (using a stand mixer or electric mixer)until just combined. Then increase the speed to medium until light, airy and fluffy. The mixture should double in volume. This takes about 5 minutes.
3. Add the flour and beat on low until just combined.
4. With a spatula, fold in 2 tablespoons of the orange juice, the zest and the butter until well blended. Cover the bowl with plastic wrap and chill in the fridge for at least an hour or for up to 24 hours.( I chilled mine for 24 hours.)
☆Preheat oven to 190°/375°
5. Grease a madeleine pan with melted butter and sprinkle flour over it. Tap out excess flour.
6. Spoon or pipe the mixture into the pan. Fill about 3/4 full. Don’t smooth out the batter.

7. Bake for 7 to 9 minutes, (mine took 9 minutes) or until they are really puffed up and the edges are starting to turn brown. Rotate the baking pan halfway through the baking time.

8. Immediately turn them over onto a wire rack. I found that I needed them to cool down for a minute or two before they could fall out. If you don’t have two madeleine pans, grease and flour them again and wait until they are completely cooled down before making the next batch.

9. While the madeleines are cooling down, mix the powdered sugar and 1 tablespoon of the remaining orange juice in a small but deep bowl. If your mixture is too thick, add more orange juice, about a 1/2 teaspoon at a time to get a thinner, more syrupy consistency. It should be like a thin glaze.

10. When the madeleines have cooled have your bowl of glaze and bowl of toasted coconut ready. Dip each madeleine halfway through the glaze. Let the excess drip off and then sprinkle with the toasted coconut. Arrange them on a wire rack for them to set. This takes about 30 minutes. 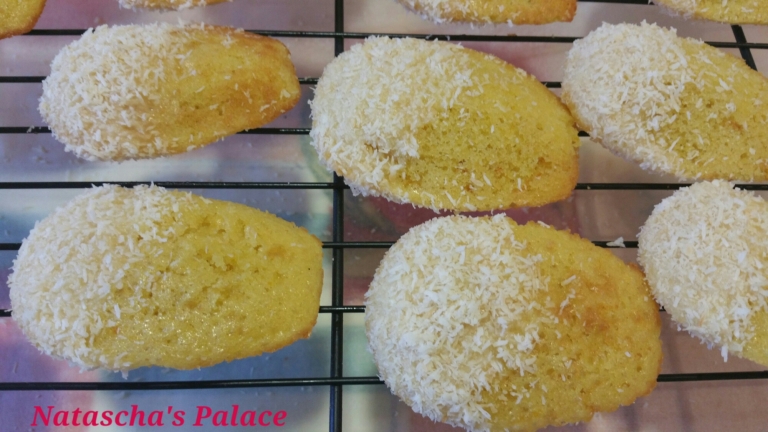 These are best eaten on the same day. 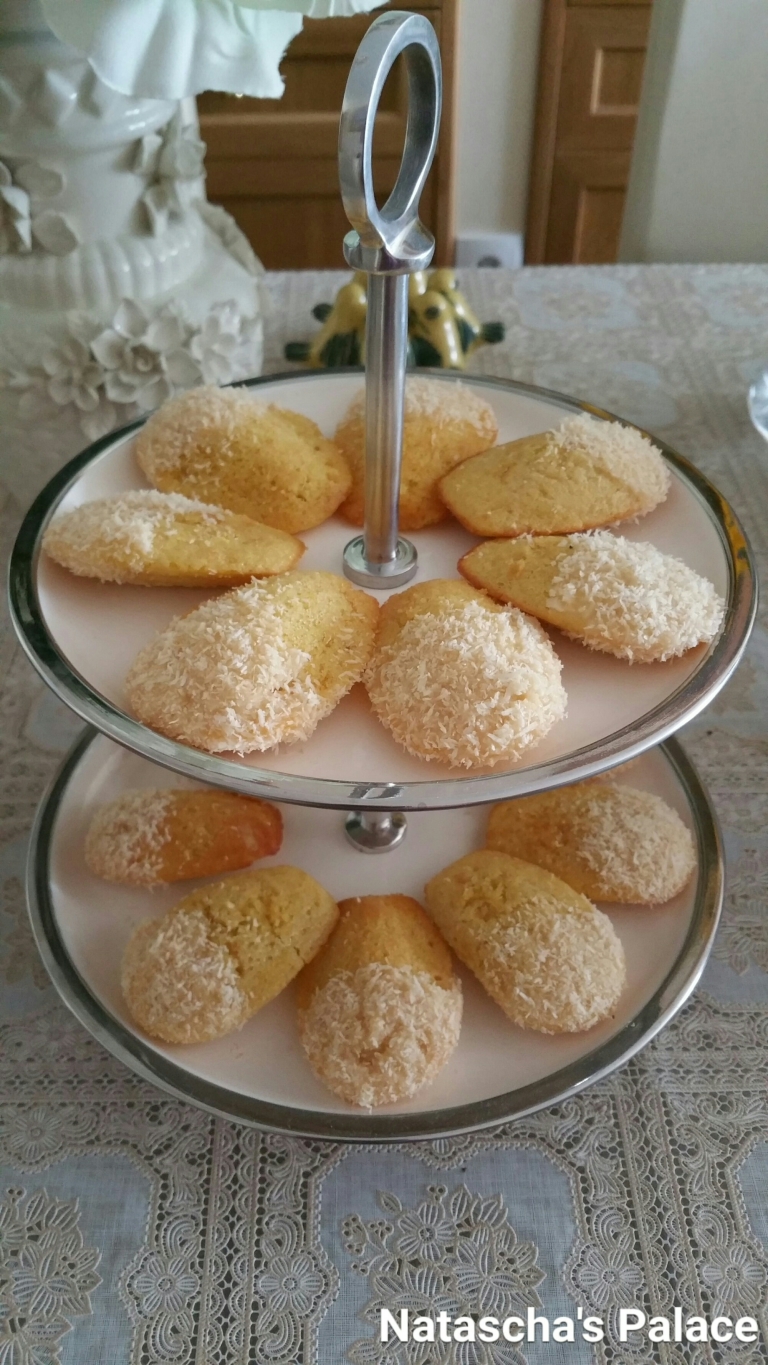 To toast coconut:
Heat the oven to 350°F. Spread coconut evenly on a cookie sheet. Bake for 7 to 8 minutes or until light golden brown, stirring occasionally. Watch closely to avoid overbrowning.To toast in the microwave oven, spread coconut in a microwave-safe pan. Microwave on HIGH for 4 1/2 to 8 minutes, tossing the coconut with a fork after each minute.