This recipe is inspired from alioli which is very popular here in Spain. It is a garlic flavoured mayonnaise which is fantastic with prawns and almost anything that you think goes well with mayonnaise. I found this in my new French cookbook and decided I had to try it. After an exceptionally tiring week at work, the burst of colour really cheered me up! It tastes as good as it looks 🙂

carrots, peeled and cut into matchsticks

beets, peeled and cut into matchsticks

avocados, peeled and sliced or cubed

hard boiled eggs, peeled and cubed
*Adjust amounts according to your tastes. I love vegetables so I go a little wild! 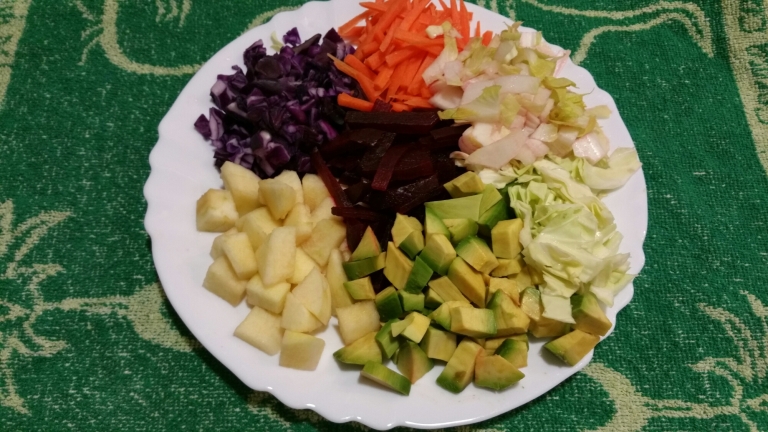 To make the dressing, mix the mayonnaise, vinegar, garlic, mustard and pepper in a small bowl until smooth. Cover and chill for several hours, if possible. 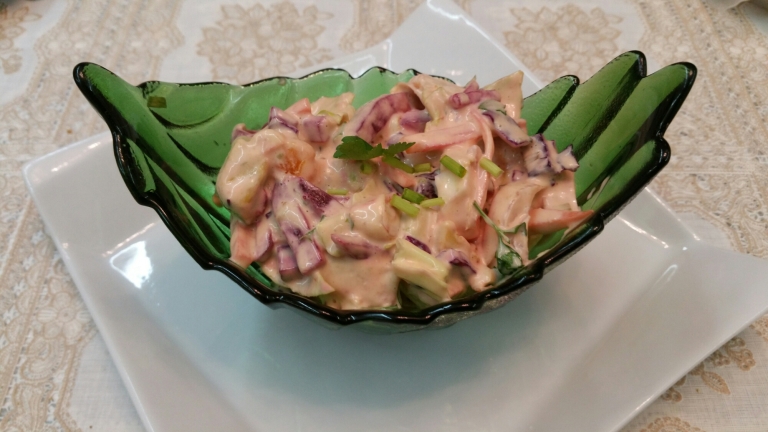 Mayonnaise NOTE: The following directions are for a hand-beaten sauce. Exactly the same system is followed for an electric beater. Use the large bowl, and the moderately fast speed for whipping cream. Continually push the sauce into the beater blades with a rubber scraper.
A round-bottomed, 2 ½- to 3-quart glazed pottery, glass, or stainless-steel mixing bowl. Set it in a heavy casserole or saucepan to keep it from slipping. 3 egg yolks A large wire whip the egg yolks and beat for 1 to 2 minutes until they are thick and sticky.

1 ½ to 2 ¼ cups of olive oil, salad oil, or a mixture of each. If the oil is cold, heat it to tepid; and if you are a novice, use the minimum amount. The egg yolks are now ready to receive the oil, and while it goes in, drop by drop, you must not stop beating until the sauce has thickened. A speed of 2 strokes per second is fast enough. You can switch hands or switch directions, it makes no difference as long as you beat constantly. Add the drops of oil with a teaspoon, or rest the lip of the bottle on the edge of the bowl. Keep your eye on the oil rather than on the sauce. Stop pouring and continue beating every 10 seconds or so, to be sure the egg yolks are absorbing the oil. After ⅓ to ½ cup of oil has been incorporated, the sauce will thicken into a very heavy cream and the crisis is over. The beating arm may rest a moment. Then beat in the remaining oil by 1 to 2 tablespoon dollops, blending it thoroughly after each addition.
Drops of wine vinegar or lemon juice as needed.
When the sauce becomes too thick and stiff, beat in drops of vinegar or lemon juice to thin it out. Then continue with the oil. 2 Tb boiling water Vinegar, lemon juice, salt, pepper, and mustard Beat the boiling water into the sauce. This is an anti-curdling insurance. Season to taste. If the sauce is not used immediately, scrape it into a small bowl and cover it closely so a skin will not form on its surface. 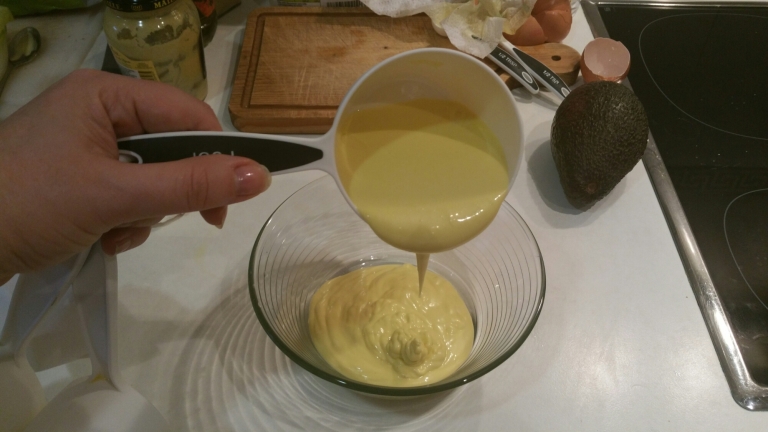 ⭐The instructions appear complicated but it is simple to do.