Recently, I tried a garlic soup which my mother in law had made and it was excellent. It was served with a small toast on top with a bit of melted cheese. A lot of you will say, “Oh that sounds disgusting” but it is a common dish here in Spain and when it comes to food, the Spanish know what they are doing. Cheap to make, packed with flavour and easy to prepare.
While perusing my Julia Child cookbook, I found that she had a French version of garlic soup. I decided to try it. After all, this IS Julia..she wouldn’t have included it if she didn’t stand by it.
So, feeling brave, I went ahead and got started.
But upon closer inspection, I noticed there was NO beef or chicken broth included. Just water, salt, pepper, sage, thyme, bay leaf, olive oil, garlic, parsley and egg. I was a bit shocked. Still, minus the egg (which was to be added later), I put everything in the pot and gazed upon it with considerable doubt.
This is how it looked: 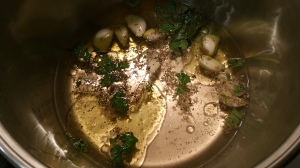 But as the heating time increased, so did the appearance. 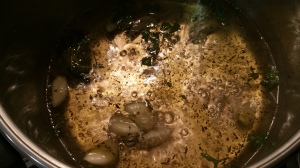 The smell was wonderful. I added the egg yoke and I had this: 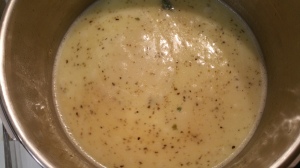 And dare I say it? Upon trying it, my husband and I both agreed it was better than his mother’s;).

The flavour was not an onslaught of garlic. It was mild and truthfully, as Julia says, you might not suspect it what it is made of.

It is a good thing to try new things. If you are feeling fearless, here is the recipe!

Enjoying your first bowl of garlic soup, you might never suspect what it is made of. Because the garlic is boiled, its after-effects are at a minimum, and its flavor becomes exquisite, aromatic, and almost undefinable. Along the Mediterranean, an aïgo bouïdo is considered to be very good indeed for the liver, blood circulation, general physical tone, and spiritual health. A head of garlic is not at all too much for 2 quarts of soup. For some addicts, it is not even enough.

For 6 to 8 people
1 separated head or about 16 cloves whole, unpeeled garlic.Drop garlic cloves in boiling water and boil 30 seconds. Drain, run cold water over them, and peel.
2 quarts water
2 tsp salt
Pinch of pepper
2 cloves
¼ tsp sage [I used marjoram]
¼ tsp thyme
½ bay leaf
4 parsley sprigs
3 Tb olive oil
A 3-quart saucepan
Place the garlic and the rest of the ingredients in the saucepan and boil slowly for 30 minutes. Correct seasoning.
A wire whip
3 egg yolks
A soup tureen
3 to 4 Tb olive oil
Beat the egg yolks in the soup tureen for a minute until they are thick and sticky. Drop by drop, beat in the olive oil as for making a mayonnaise.
A strainer
Rounds of hard-toasted French bread
1 cup of grated Swiss or Parmesan cheese
Just before serving, beat a ladleful of hot soup into the egg mixture by droplets. Gradually strain in the rest, beating, and pressing the juice out of the garlic. Serve immediately, accompanied by the bread and cheese.

* I didn’t serve it with bread or cheese.
* If you are not keen on adding the egg, I thought it was lovely even without it. You decide!