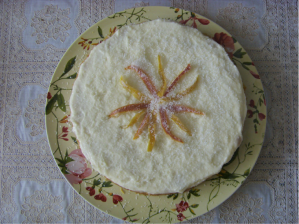 I have  been married for two and a half years now. My husband is Spanish and I am Canadian with a German Irish background. He loves sweets and cakes and baking for him is such a pleasure. When we were first married, I made him all kinds of special treats that I was familiar with making and he was happy.  But every now and then he would say..¨Can you make me a bizcochona?¨ I didn’t know what that was(I later discovered it is sponge cake) and when I heard that it was sweet  but involved ingredients like  olive oil, flour and  yogurt, I was not too keen on trying it even though it was a very common sweet here in Spain. It just sounded boring to me! And baking with olive oil? Ugh!  Still, I wanted to make him happy and so I made one.  My husband was over the moon and I discovered that I was wrong.  It was, indeed, very good!

One of the things that I love to make for Christmas (which is not traditional in Spain) is Delia Smith´s Christmas cake, which is a fruitcake. The flavours of the  fruit and brandy are incredible! My husband didn´t know what this type of cake was like but when I told him that I was going to make my own candied orange and lemon peel for the cake he exclaimed,¨Ugh! Peels?¨He was not too impressed but I told him..¨You will be surprised what some sugar will do!¨ As soon as I said it, I remembered the Mary Poppins song:

Well, my husband tried the peel  and he loved it.  He could not believe what a bit of sugar could do with something that he was sure would taste bad..like medicine I guess! In both situations, we learned what some sugar can do! Keeping in mind the method of bizcochona and fruitcake, I came up with this recipe. Maybe you will enjoy making it too.

August 27th 2014, marked the 50th anniversary of when Mary Poppins first premiered. Even after all this time, it is still a wonderful movie.  Life can be hard to take at times, like medicine. But with someone who loves you, it is definitely much sweeter! 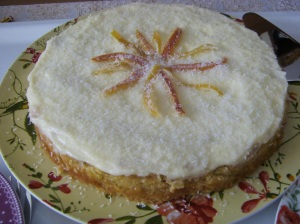 Rum (Enough to cover and soak the peel)

Method:
At least a day before making the cake, you should soak the orange and lemon peel in rum. I cut the peels into small squares with a pair of kitchen scissors. I put them in a small container and poured enough rum over them to cover them, put the lid on them and set them aside. I let them soak for about 24 hours. Yes, you can soak them for longer and the flavour of the rum, lemon and orange will be stronger.

Homemade candied orange and lemon peel. (Not 1 3/4 cups but just to show you what it looks like before chopping and soaking)

Cut and soaking in the rum.

The next day:
Preheat your oven to 170 degrees on both levels (NEVER higher)
Step 1. Drain your orange and lemon peel and set aside the rum and peel flavoured mixture that is leftover. You will use this for the icing and have some leftover for your next cake!
Step 2. In a bowl, mix the eggs, baking powder yogurt and mix. I used Danone lemon yogurt but any will do.
Step 3.Add the flour, sugar, lemon and orange peel, and olive oil. Mix until smooth.

Step 4. Grease a 26 cm round cake pan with olive oil and pour in the mixture.

Step 5. Place in the oven in the middle rack and bake for about 45 minutes.  About 15 minutes into the baking time cover the cake with foil so as the top does not burn.

Set it aside to cool down while preparing the icing.

Mix the first three ingredients until smooth. Add the three tablespoons of  rum and peel flavoured mixture and stir until smooth.

When the cake has cooled down, remove it from the pan. Put on the icing.  I like a thick layer on the top and not on the sides, but whatever you prefer. Decorate with candied peels and drizzle with grated coconut.

This cake is special because I adapted it from a traditional Spanish recipe  called bizcocho. Before I came to Spain, I never thought that olive oil could really be used to make a cake, but I was wrong.  The outcome is an extremely moist and the candied peels make it a citrusy delight. The baking time is long, but worth it. The measuring of ingredients with the yogurt container caused me to be skeptical at first, but it really works! Please be sure to keep an eye on it as it is baking as it will begin to turn Brown on the top early on in the baking time. Have a sheet of foil ready for covering. (About 15 minutes into the baking time) Cover and store in a cool, dry place.